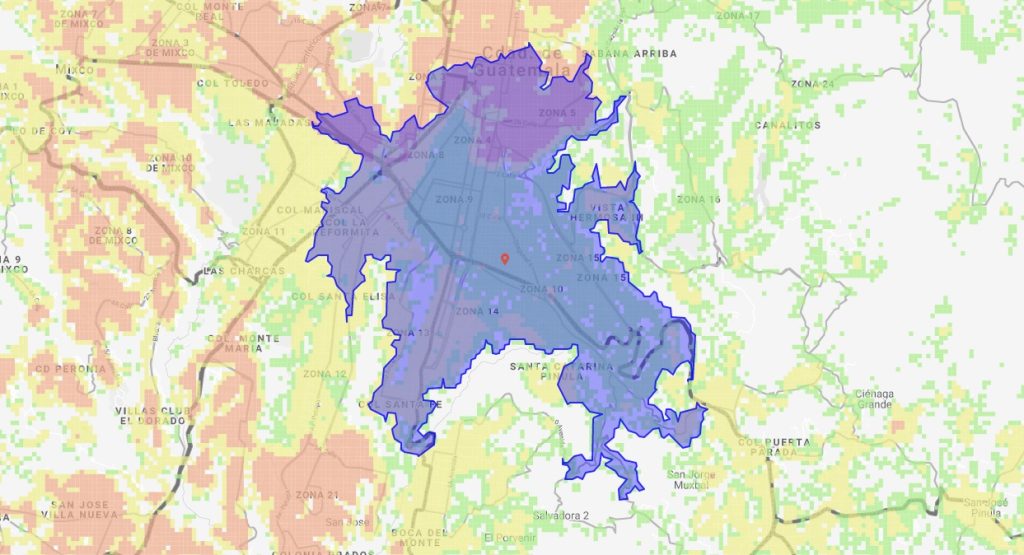 Supermarkets: How to Measure the Location Potential?

Finding out how many people live in the surroundings of the establishment, their income levels, their ages and their tastes and interests, is fundamental information to measure the potential of a supermarket’s location.

Using the Geomarketing solutions we have developed for our clients, PREDIK Data-Driven‘s Business Intelligence team analyzed the environment of some of the main supermarket locations operating in Central American countries. Below is an excerpt of the study’s findings.

Highlights of the analysis for Central American countries.

When analyzing the potential demand for the Saretto Supermarket, which in the country’s capital is located near Plaza San Rafael, in Escazu, it can be seen that at a distance of 15 minutes by car, there is a target market of close to 647 thousand people, who together spend more than $413 million monthly. When analyzing the main interests of these people, the analysis specifies that of the total number of consumers, 8% are interested in seafood and 7% in vegan foods.

Super 99, a supermarket that in Panama City is located on Via Porras, there is a potential market of 571 thousand people 15 minutes away by car, who monthly and together spend about $82 million. When evaluating the interests of this segment of the population, the data details that of the total number of consumers, 10% show interest in beverages such as fruit juices and 18% in grilled meats.

Super Selectos, which in the country’s capital is located in El Paseo Shopping Center, in Escalon, there is a potential market of 442 thousand people within a 15-minute drive, who monthly and together spend about $124 million. When evaluating the interests of this segment of the population, they detail the data that of the total number of consumers, 14% show interest in baked goods and 35% in beer.

The Commercial Intelligence tool specifies that the potential demand of La Torre supermarket, which in zone 10 of the capital of the country operates in the shopping center La Estacion, it is appreciated that at a distance of 15 minutes by car, there is a target market close to 365 thousand people, who monthly together make expenditures of more than $118 million. When the main interests of these people are examined, the analysis shows that of the total number of consumers, 22% are interested in beverages such as tea and 9% in seafood.

In PREDIK Data-Driven we developed a geomarketing tool based on interactive maps of isochrons and consumer data, which allows us to identify where people are and what consumer characteristics they have. The map incorporates, for any Central American country, the variables population, income, average monthly expenditure and consumer interests. With this information it is possible to identify potential customers and define investment plan strategies accordingly, or to explore home delivery times from any point of sale.